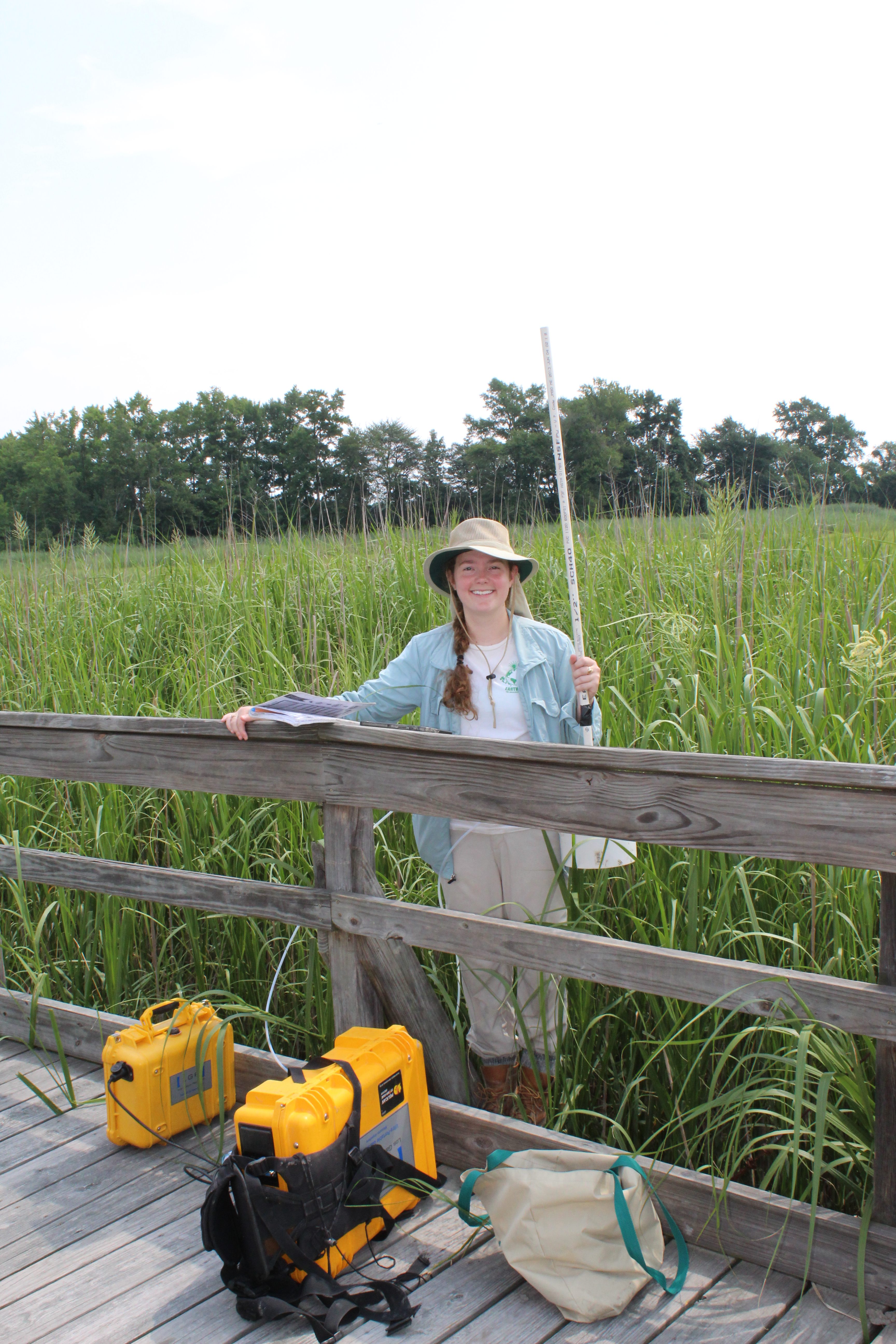 Maggie Capooci found her calling in the salt marshes of Georgia and Louisiana during an undergraduate field trip for an estuary ecology class at the University of Scranton. Her love was confirmed during a summer research fellowship at Woods Hole Oceanographic Institution in Cape Cod, Massachusetts, where she studied the differences between natural and human-impacted salt marshes and the return of natural functioning as human impacts were removed. Both of these experiences taught her that she really digs field work, and gave her a feel for some of the analytical instruments used in marshes. She’s had other internships that taught her she likes science, but this ecosystem really fired her up.

Now a doctoral student in UD’s Water Science and Policy Program, Capooci is both a DENIN Environmental Fellow and a National Science Foundation Graduate Research Fellow. She’s working with Dr. Rodrigo Vargas, assistant professor of plant and soil sciences, at St. Jones Reserve near Dover, Delaware, to explore how carbon is produced and released as carbon dioxide and methane in this tidal salt marsh. These are greenhouse gases, so understanding the processes that lead to their release to the atmosphere increases our ability to predict climate change impacts.

Capooci enjoys being part of a team of graduate students working on different aspects of the ecosystem at St. Jones Reserve. She’s also drawn to the natural beauty of tidal salt marshes. “They’re a really beautiful and dynamic ecosystem,” she says. There’s great birdwatching, and she enjoys the opportunity to interact with the public while she’s working. They often have questions about what she’s doing and why.

Capooci notes that the constant movement of corrosive saltwater through the soil of a marsh is an ever-present challenge to working there. She’s become skilled at modifying instrumentation typically used in much drier ecosystems to work in the marsh.

All the hands-on experience will be an asset when she finishes her Ph.D. in a few years. She’s thinking about spending a year on Capitol Hill to learn more about how science policy is written before seeking a job with federal or state government as director of science at a nature reserve.

Capoooci serves as president of the UD student chapter of the American Water Resources Association, a group that hosts career panels, networking events, litter cleanups, and educational outreach to the public. She also volunteers at St. Jones Reserve to teach 4th graders about the marsh and the environment.

She makes time to read and bike in the state parks, and she’s teaching herself to crochet.

Photo: Capooci uses a greenhouse gas analyzer to measure the amount of carbon dioxide and methane emitted from the soil of the salt marsh at St. Jones Reserve, Delaware. Photo by Alma Vázquez-Lule