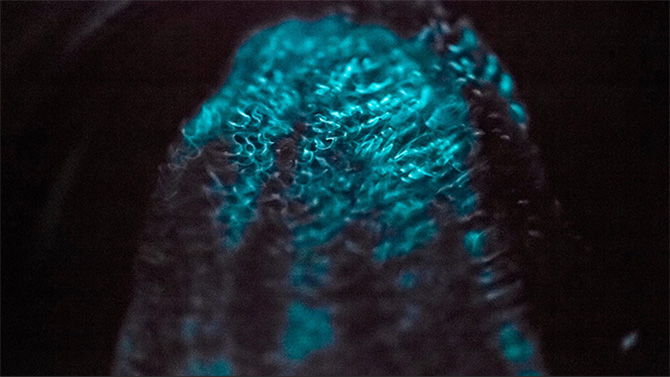 One hundred feet below the surface, bioluminescence is the dominant light source during the polar night

A new study published today in Scientific Reports by University of Delaware researchers and colleagues reveals that 100 feet below the surface of the ocean is a critical depth for ecological activity in the Arctic polar night — a period of near continuous winter darkness. It is at this depth, the researchers said, that atmospheric light diminishes in the water column and bioluminescence from marine organisms becomes the dominant light source. It also is the site of significant changes in the composition of luminescent organisms present in the water column.

“It turns out that approximately 100 feet in depth is an important transition zone,” said Jonathan Cohen, a UD assistant professor in the College of Earth, Ocean, and Environment and co-author on the paper.

The research team has been studying how much biological activity takes place in the Arctic polar night since 2012, when UD’s Mark Moline, director of the School of Marine Science and Policy and colleagues in Norway and Scotland began exploring how sea life copes with continuous winter darkness in Svalbard, Norway. Prevailing scientific thought until then was that the food web remained dormant during the polar night.

The researchers said that bioluminescence can help explain how some organisms feed and maintain activity during the polar night period and how light can still be involved in ecological processes even during a time of darkness.