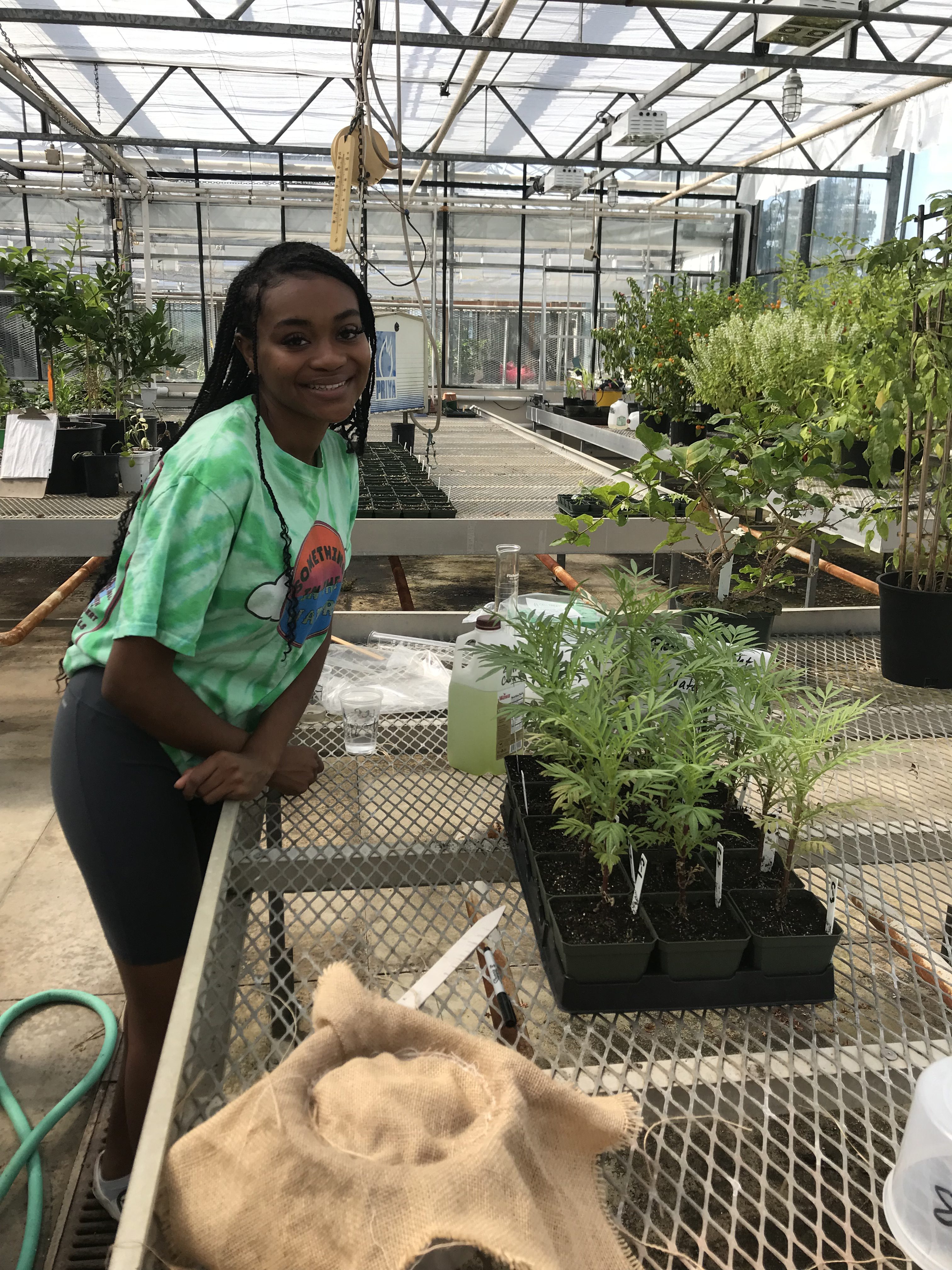 In August junior Cierra McNeill presented the results of her summer research project at the university’s Undergraduate Research and Service Scholar Celebratory Symposium.

McNeill, a mechanical engineering major and Delaware native, was interested in the project because “it was a great balance between everything I’m passionate about—plants, the environment, sustainability, and design work,” she says.

Poultry litter is chicken manure, old bedding material, feathers, and food residue removed from poultry houses. It is made into biochar through heating to a charcoal-like consistency.

Biochar made from poultry litter is a great example of a beneficial reuse of a material that can be problematic in excess. Farms on the Delmarva Peninsula produce over 550 million broilers—chickens raised for meat—each year. This high density of birds creates a nutrient management challenge. The manure may be applied to crops, but excess nutrients from the manure in water can lead to problems such as toxic algal blooms and dead zoneswhere people can’t drink, fish, or swim in the water, and conditions are harmful toaquatic life.

McNeill’s project is examining whether poultry litter biochar might be a replacement for chemical fertilizer and a beneficial reuse of a waste product. She tested 3 sizes of biochar particles—fine, medium, and coarse—to see which produced the best results for plant growth. Every few days she ran a designated amount of water through a “tea bag” containing biochar and watered the experimental marigolds with the emerging liquid, or leachate.

She is measuring the amounts of various nutrients important to plants in the leachate. This is important to know because an oversupply of nutrients applied to crops is harmful to water quality.

By early August McNeill had found that phosphorus and potassium levels in the biochar leachate were almost double that found in conventional fertilizer and the finely ground biochar produced leachate with the highest concentrations of nutrients. McNeill is continuing the research this fall because the amounts of some nutrients flowing from the biochar tea bags were still rising at the end of the summer experiment.

McNeill found most challenging but also most enjoyable the research and experimentation to create the biochar tea bag. The research team wanted it to be made of biodegradable materials. She ended up using a coffee filter on the inside, a nonbiodegradable second layer, and burlap on as the outer layer. The intent was that if results show the biochar to be a good replacement for chemical fertilizer it could be sewn into biodegradable landscape fabric that could be laid on the ground with plants as a slow-release fertilizer and to help reduce erosion.

This project honed McNeill’s time management and long-range planning skills. “A lot didn’t go as planned,” she says, “and there were lots of variables,” so it was important to stay on schedule.

Dr. Jules Bruck, professor and director of landscape architecture, was McNeill’s primary faculty advisor. She says McNeill developed her communication and creative problem-solving skills during this project as she reached out to six different faculty and staff members in engineering, soils, and geology for their expertise in aspects of the project. McNeill’s project was jointly funded through the Coastal Resilience Design Studio by Delaware Sea Grant and the Delaware Environmental Institute.

Karen Gartley, director of the UD soil testing program, says McNeill acquired other skills as well. “She quickly learned that research often involves trial and error as we went through several versions of biochar teabags. She learned how her lab analyses were run and how to do the calculations she would need, such as leaching rates and irrigation rates. She also got experience in how to organize data for presentation and how to communicate that information to an audience via her poster.”

McNeill has her eye on architecture school when she’s done her degree, or possibly working in the sustainable energy technology industry.