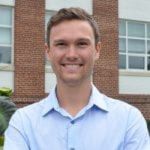 Spencer Moller grew up on a farm in Minnesota that’s been in hisfamily since the 1860s. He was a driven kid. At age 12 he applied for a loan from the Farm Credit Service to start a purebred beef shorthorn cattle business that he and his family maintain today. They specialize in breeding and sire production.

At age 13 Moller began working for Pioneer Hi-Bred Seedon their corn breeding program and continued for the next decade. He moved up to supervising work crews all over Minnesota, and even moved to Hawaii to work for them.

People tend to think of herbicide use in the agricultural Midwest, but even in Hawaii, herbicides were a frequent topic of conversation at Pioneer.

Moller’s rich farming background gives him a unique vantage point for his Ph.D. research. As a 2020 DENIN Environmental Fellow, he is studying the degradation of glyphosate, the active ingredient in Roundup herbicide, with the goal of making its breakdown products more environmentally friendly and less persistent in the environment.

To explore the degradation process, Moller is developing a new method to trace all the various breakdown products along the way to complete degradation, rather than just looking at the final end products. He hopes to help alleviate the more negative and dominant pathway of degradation and bias breakdown toward less environmentally persistent compounds with the help of minerals or microbial enzymes already present in the environment.

Funding for this work is from the U.S. Department of Agriculture. If the research team comes up with effective answers for how to make glyphosate more environmentally friendly, it would be up to the herbicide’s manufacturer to decide if they want to incorporate the innovation into their product.

Glyphosate is a controversial herbicide at the heart of tens of thousands of lawsuits. The science still isn’t clear on whether it causes cancer.

“The problem with glyphosate is that people use it in severe excess,” Moller says.

His family’s farm doesn’t use glyphosate, but he knows it’s integral to many farms’ profitability and economic sustainability.

“The impact glyphosate has on farmers and what it means for their sustainability is something I’ve been around my whole life,” says Moller. “It’s so cost-effective that there’s nothing out there that can really replace it. So the thought becomes how do you better use it to continue to support farmers and protect the environment and maintain a sustainable balance between the two? For me it’s very personal. I’ve worked for different farmers. Glyphosate has become an integral aspect of their success, and in that sense it’s intriguing to me to completely understand its environmental fate.”

Moller did an undergraduate research project at the College of St. Scholastica in Duluthon how electronic waste breaks down. Through this he learned about Dr. Donald Sparks’s research in soil chemistry. Sparks, chair and professor of plant and soil sciences at UD, suggested that Moller contact Dr. Deb Jaisi, associate professor of environmental biogeochemistry, given their common interests. Upon hearing about Jaisi’s work on glyphosate degradation, Moller was hooked by the potential to help farmers and the environment.

“The really incredible part of this research,” says Moller, “is that it’s very novel. We’re doing a lot of method development and trying to push the science and implement these potential technologies that herbicide developers could choose to use.”

The tool he’ll use to trace degradation—a multi-isotope labeled molecule—doesn’t exist yet. But if he can work out the method it may be useful in tracing the breakdown of other broad-spectrum herbicides such as dicamba or 2,4-D, which are potent and widely used herbicides.

Besides his farming background Moller says that another strong influence for him was Dr. Allen Chaparadza, a chemistry professor formerly at the College of St. Scholastica. Moller is a first-generation college student and had never considered graduate school until Chaparadza encouraged him to.

“He opened my eyes to what I could achieve,” Moller says.

Moller thinks he’ll probably do a postdoc after he’s finished with his Ph.D. He’s also interested in possibly continuing outreach for ag and the environment on Capitol Hill, perhaps through a congressional fellowship program. “Washington, D.C., is probably my favorite place in the whole U.S. I just love the energy down there,” he says. He has spoken multiple times to the Delaware and Virginia congressional delegations through the Science Societies.

Moller played tennis in college and also enjoys golfing, hiking, and camping. But, he says, “My hobbies really revolve around the committees I serve on.” He is a lead mentor for the new EmPOWER program that seeks to help other graduate students manage grad school, and on the Plant and Soil Science Department Diversity Caucus.

“I really enjoy working with other people toward a common goal,” Moller says.