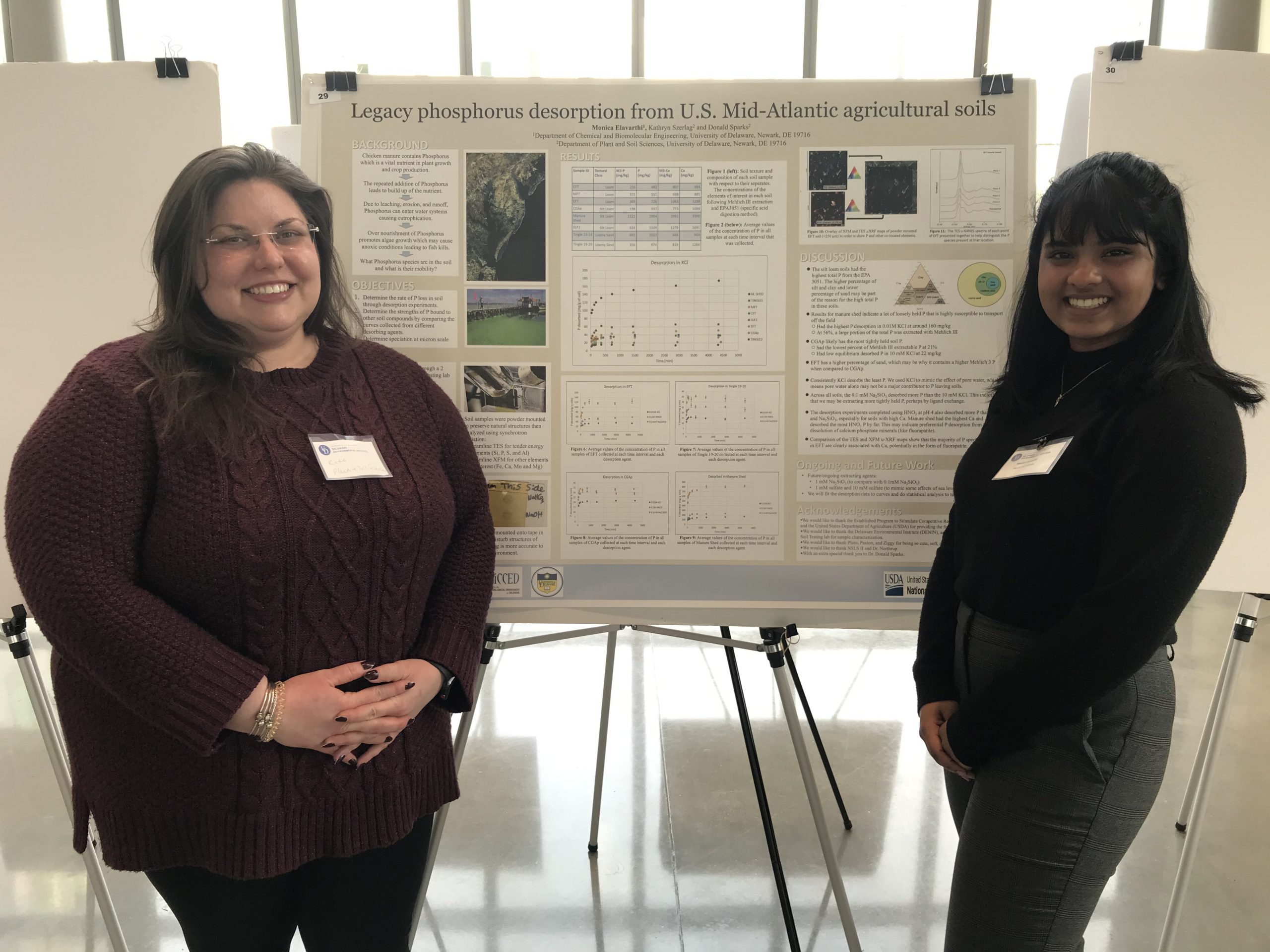 Mentorship yields pay-dirt all around

“From the first moment I met Monica,” Kathryn Szerlag said, “I knew she was a different kind of undergraduate.”

At the time, Elavarthi was a rising sophomore in chemical engineering, but she wanted to conduct research in an applied field. She stumbled on Sparks’s lab group through the university’s research directory, and Szerlag’s project caught her attention.

Over the two-year internship, which evolved into a mentorship, Elavarthi made increasingly significant contributions to Szerlag’s Ph.D. research. They worked together to determine the forms of phosphorus in soils from the Delmarva region, using various laboratory techniques complemented with research conducted on highly specialized and technical equipment at Brookhaven National Lab. Phosphorus is an important agricultural plant nutrient but also a water pollutant to Chesapeake Bay.

In pursuing the internship, Elavarthi wanted to “get a better understanding of scientific processes beyond what we learn in class. In class we only learn about the science that’s already known. But I thought it’d be really cool to get more involved in the science that’s new.”

Elavarthi began the internship with no specialized soils knowledge, so first Szerlag had her read introductory materials to catch up. By the end of that first summer Elavarthi had enough data to write and present her first scientific poster. “This was the first time I wrote scientifically in college,” she says.

By the end of the internship two years later, Elavarthi was independently running lab work; helped analyze, interpret, and synthesize the data she had generated; and helped write an article for submission to a refereed journal. The results “shed light on the types of P found in agricultural soils and what promotes P release, which in the long run may help future best management practices for phosphorus around the Delmarva,” says Szerlag.

“By staying with the internship for two years,” Szerlag says, “Monica was able to gain a much deeper understanding, because she was able to do more and more experiments, analyze the data, and understand the chemistry.”

And that’s the point of an internship.

“I was not just trying to get work from her,” says Szerlag. “Her job for me was to learn. I was trying to push her to come up with ideas of what to do next.”

Elavarthi presented at several undergraduate research symposia and had a poster accepted to the American Chemical Society national conference before COVID-19 shut it down.

Elavarthi did so well with the internship that she was able to accompany Szerlag on a trip to the National Synchrotron Lightsource II at Brookhaven National Lab on Long Island. The synchrotron produces stable radiation that allows the direct determination of solid forms of phosphorus in the soil at the micron scale. Such a trip is a privilege not typically granted to undergraduates, but it made a deep impression on Elavarthi. “Actually seeing the technology and talking to the professionals who work there, I got a better understanding of one of the top technologies in the country for cutting-edge science,” she says.

Szerlag says that this experience of guiding Elavarthi’s internship “solidified that I want to be a mentor. The research in the Sparks lab is very cutting-edge and awesome. You get to use the synchrotron, which is very exciting, but research is second for me to mentorship and teaching. Seeing Monica do well makes me so happy.”

Szerlag defended her Ph.D. dissertation in August 2020 and is now an assistant professor of soil science and environmental chemistry at Westfield State University in Massachusetts.

Elavarthi is not yet sure what she’ll do after completing her bachelor’s in the spring. This internship “might have pushed me to look at more than just chemical engineering.”

The two intend to stay in touch. “I think she’ll be a lifelong mentor for me,” says Elavarthi.