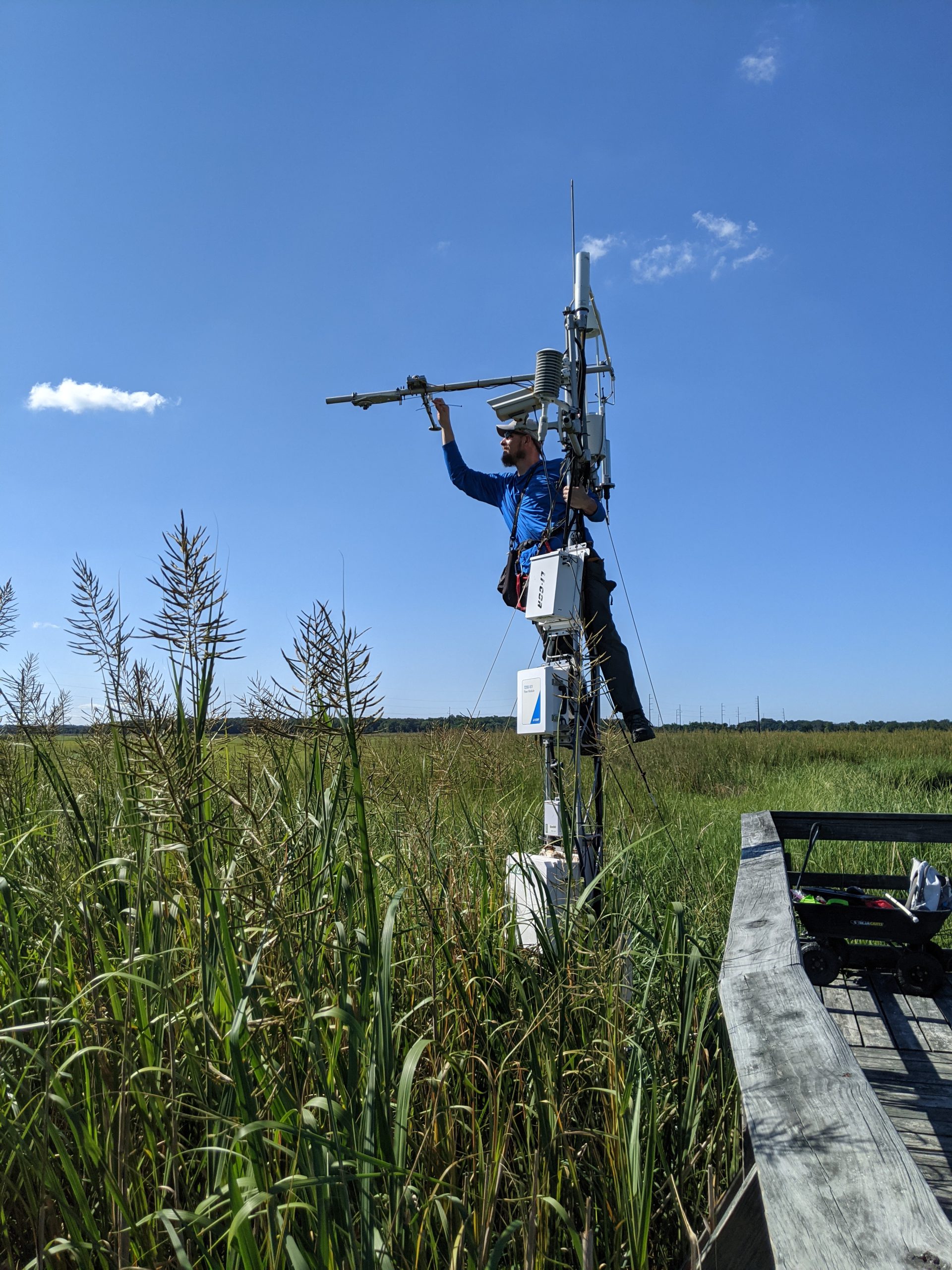 Andrew Hill is the first person in his family to earn a bachelor’s degree. “I’ve always loved school, and it’s hard for me to stop going to school,” he says. “I have to keep learning.”

Hill is exploring gas exchange in a salt marsh ecosystem at St. Jones Reserve near Dover with Dr. Rodrigo Vargas, professor of ecosystem ecology and environmental change in the UD Department of Plant and Soil Sciences. Hill was recently named a DENIN Environmental Fellow in support of this research.

“Tidal wetlands make up a small chunk, about 2.4%, of what we call coastal ecosystems,” Hill says. “But that 2.4% actually translates into a lot of power as far as carbon exchange is concerned. I’m trying to improve how we can best measure and monitor these ecosystems so we can better include them in carbon cycling models and regional climate models.”

Scientists typically get many ecosystem measurements from remote sensing, which uses satellites or aircraft-mounted equipment to collect data by detecting the radiation reflected from Earth. But salt marshes are typically located just on narrow stretches of coastlines. It’s difficult to use remote sensing in these environments.

The first part of Hill’s dissertation research used a new approach with on-site optical sensors to gather data in the marsh. The team has largely completed that work and published a journal article. Many of the traditional sensors are unable to identify the end of the growing season, so they overestimate growing season length. This introduces uncertainty into the models. “We narrowed down which sensors we should focus on for these systems and which indices we should use,” Hill says, “and that will help us better incorporate these systems into models.”

The second part of his dissertation deals with measurement of carbon exchange in the salt marsh, this time comparing the measurements from a large, expensive piece of equipment to those from smaller, less expensive equipment. He hopes to come up with other ways to easily measure and monitor these systems. The goal is to determine how much carbon dioxide and methane are taken up or emitted. A lot of that work has been completed as well.

The third part of Hill’s dissertation will look at about 7 years of meteorological data, as well as water quality data paired with carbon exchange data. “We have one of the longest continuous records of carbon exchange in a salt marsh of anywhere in the world,” Hill says. “I’m very excited to dive into that data and explore some new analysis techniques.” He hopes to identify the primary driver of annual emissions of carbon dioxide and methane. Is it day to day emissions, or is it pulse events that we get from rainfall or storm surges?

It’s important to understand these natural processes because “the salt marsh system is incredibly efficient at taking carbon out of the atmosphere through photosynthesis,” Hill explains, “but it’s also really good at exporting that carbon to estuaries and the open ocean. This is important for the marine food chain” and fisheries.

Salt marshes are disproportionately important as storage places for carbon, in light of climate change. A lot of the carbon deposited in marsh sediments will remain there much longer than in other ecosystems. These sediments have a very slow rate of decomposition, so the rate of release of carbon back to the atmosphere is much lower than you would find in other systems such as a forest or farm field, Hill says.

This research is interesting to Hill because “we’re really pushing the frontier of science. It’s really fun when all the literature you’re reviewing for your research was published within the last year or two years. And there’s this big push for work to come out of these systems right now. So it’s really nice to be a part of that.”

“A lot of scientists are very specialized,” Hill says. “I tend to not think of myself as very specialized, but very broad. I think my specialty is bringing together a lot of different ideas, a lot of different disciplines, and being able to work with that to solve problems. So jack of all trades, master of none, but that’s what it takes to solve some of these issues.”

Hill was a biology/plant science major at Minnesota State University at Mankato.

During undergrad and after graduation, he worked in an annual flower nursery for about a year. “That was really interesting to me to be able to harness a natural thing like plants and flowers to make a profit,” he says. He also enjoyed engaging with the public and helping people find plants for their gardens.

But when considering master’s work, he was drawn to geography because it connects people and place. Again at Mankato, his master’s work involved the study of regional climate and transpiration rates of midwestern corn and soybean fields. He and his coauthors found that with agricultural intensification over the last several decades crop plant photosynthesis actually influences the regional climate in the Corn Belt.

Hill expects to finish his doctorate in about 2 years. After that, he says his career will be driven by the opportunities at the time. He would consider working toward becoming a professor, working for a government agency or national lab, or for private industry, depending on the mission and objectives.

Asked what he’s most proud of, Hill says, “I think my publications. It takes a lot to get a publication. People don’t realize that, especially when you’re just starting out as an early career scientist. The process can be incredibly daunting, getting those reviews back, and it takes months and months. To be that interested and dedicated to a single thing to see it through that far, I’m really proud of doing that.”

Outside of the office, he takes his mind off work by hiking almost every day with his two kids, a 7-year-old daughter and an 11-year-old son. They make a game of trash scavenger hunts along the way.

Hill’s son was his fieldwork assistant in 2020 due to the university’s COVID restrictions. Hill says, “He was paramount in getting the chamber gas exchange measurements completed.”

“My kids are very excited and motivated by what I do. My daughter always tells me she wants to be a scientist. I feel like I’m kind of paving the way and changing the trajectory of things because I’m really the first person to finish college in my family and to pursue research as a career.”