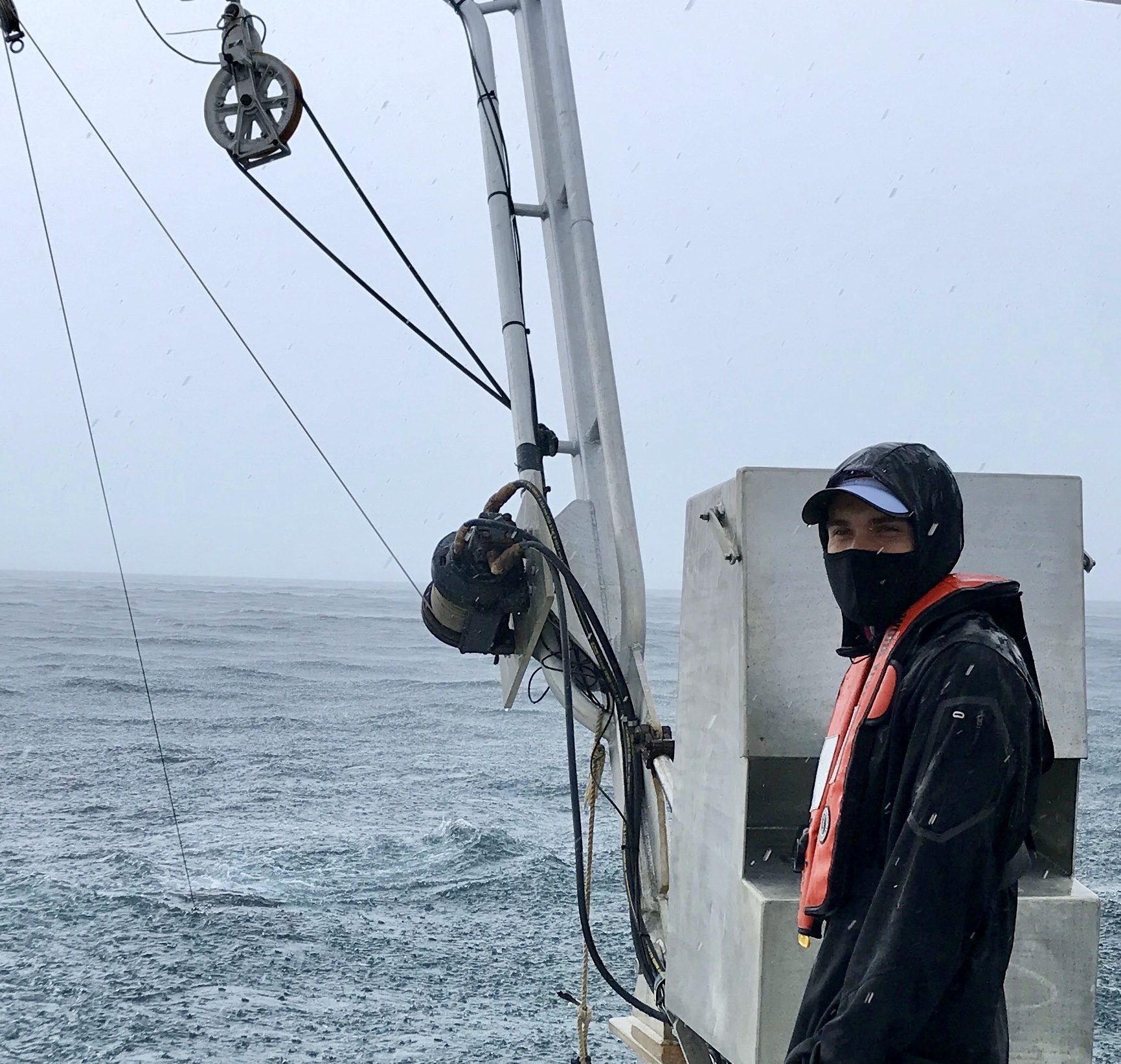 As part of an undergraduate research program at the University of Wisconsin, Madison, Hayden Boettcher visited the remote Caribbean islands of Turks and Caicos, about 385 miles east of Cuba. There he came upon a beach littered with plastic. The sheer amount of plastic washing up on an island seemingly so far from civilization made him wonder where it was from and how it affected marine life. This experience was integral in his decision to pursue a doctorate at UD in Marine Bioscience with Dr. Jonathan Cohen, associate professor of marine science and policy.

Boettcher is one of eight doctoral students recently awarded a DENIN Environmental Fellowship in support of their environmentally relevant research at UD.

Boettcher earned dual bachelor’s degrees in zoology and conservation biology in 2018 from the University of Wisconsin. Then he moved to Philadelphia because he wanted to pursue marine science and Wisconsin wasn’t the place for that. For a year he worked building fish tanks and aquariums to get some marine experience on his resume. In the meantime, he researched graduate programs. He stumbled on Dr. Cohen’s work and knew he’d found his place.

Since 2019 Boettcher has been studying whether microplastic exposure during larval development affects blue crab survival and return to the Delaware Bay population.

Plastics have become increasingly prevalent in society, and microplastics are a growing environmental concern worldwide. Boettcher noted in his application for the DENIN fellowship: “Microplastics (1–5,000 micrometer particles) are the most abundant form of plastic debris and have invaded every major marine ecosystem, from coastal waters and estuaries to deep-sea sediments.”

Evidence suggests that the blue crab lifecycle has plenty of overlap with microplastic pollution in the bay. Adult crabs release larvae at the mouth of Delaware Bay. The larvae are pushed out into the open ocean where they develop, and are eventually transported back into the bay where they rejoin the adult population.

“We think that the motion of the larvae getting pushed out [of the bay] and then back in would overlap highly with microplastics,” Boettcher says. “The physical forces that are pushing the larvae out are the same forces pushing the plastic around in the water.”

Boettcher has already assessed the level of microplastic pollution in the Murderkill and St. Jones Rivers in Delaware. He found higher than average concentrations of microplastic there compared to the greater Delaware Bay. He found that about 48% of sampled adult blue crabs from these rivers had ingested microplastics.

His doctoral study will be the first to systematically assess the impact of microplastics at population and ecosystem scales in Delaware Bay. This information will feed into the state’s regional management decisions for the blue crab fishery.

Boettcher also cites the cultural significance of blue crabs in Delaware. “You drive around and see blue crabs on people’s cars. I think people just generally care a lot about what happens to blue crabs and would hate to see something happen to the population.”

The first half of the project looks at crabs in the natural environment. Boettcher has collected water samples to assess the amount of microplastics in the water of the bay and the coastal shelf, the area of relatively shallow water just offshore. He can also estimate the number of blue crab larvae in those areas from the water samples. He wants to know how the plastic and the larvae overlap and if they’re interacting. He’s also examining whether the larvae are ingesting microplastics in their natural environment.

The second half of the project involves lab experiments that aim to mimic what’s happening in the natural environment. In the lab, under different microplastic concentrations in the water, he’s raising blue crab larvae from eggs until they’re tiny “first-stage” crabs. This process of development takes 35–40 days. He’ll track their survival and different physiological parameters, such as growth and respiration, how long it takes them to molt, and their activity levels.

He’s assessing only up to first-stage crabs, rather than all the way into adulthood, because scientists hypothesize that these tiny young stages are likely the most vulnerable to microplastics pollution.

“There’s so much exciting stuff about this research,” he says. “I really enjoy the laboratory aspect of it—specifically mimicking what’s happening in the environment. A lot of previous studies have used higher concentrations of plastic, or types of plastic that aren’t really typically found in the environment. So we’re trying really hard to pair the field observations with the laboratory experiments. That has meant pairing not only the concentrations that we find in the natural environment, but also the plastic types and the plastic shapes.”

There are different types of plastic, such as polypropylene and polyethylene, and also different shapes of microplastics. For example, some are like grains of sand and others are long, stringy fibers.

Because of the COVID-19 pandemic, Boettcher was unable to work in the lab for most of summer 2020. He used that time to devise a way to create microplastics for use in his experiments, because nobody sells this material for research. Much previous research has used microplastic beads, but this isn’t the shape most commonly found in Delaware Bay. He is really trying to mimic the natural system, hence the need to make his own.

Boettcher’s immersion in this topic fulfills a long-time dream. He grew up in Wisconsin in a family that did a lot of hiking and camping. Since he was 10 or 11, he wanted to be a marine biologist, although he admits he didn’t know what that meant then. “Caring for the environment is something that was instilled in me as a little kid,” he says, “and something that really flourished while I was at the University of Wisconsin.”

When he graduates, hopefully in 2024, Boettcher thinks he’d like to work at a teaching-focused college or university and continue to do research. He clearly has a passion for helping younger people find their scientific footing.

This summer he mentored two undergrads in Cohen’s lab through the National Science Foundation’s Research Experiences for Undergraduates program. It was “just amazing,” he says. “They bring so much energy and liveliness to the lab. It’s great to see their enthusiasm for science. And it’s contagious. I would really enjoy continuing to do that work in the future. Seeing them present their projects at the end of the summer was by far the most rewarding experience I’ve had since I’ve gotten here. You kind of feel like a proud parent watching them.”

He has enjoyed a similar nurturing relationship with his advisor, Jonathan Cohen. “When I first started here,” Boettcher says, “I was pretty green to research. I give him a ton of credit for allowing me to make mistakes as I go and not stepping in when he saw a mistake coming and just letting me make those mistakes and learn from them myself. I think that’s a really valuable thing for a mentor to do, and it’s a particularly challenging thing to do. That’s something that I certainly would like to emulate when I’m mentoring students of my own. I certainly feel like a more confident and self-sufficient scientist now.”

To build experience teaching, Boettcher and a fellow graduate student Emmie Healey at the Lewes, Delaware, campus, where most students have a marine focus, founded a new graduate student organization called Share Your Skills. Most grad students in Lewes have research assistantships rather than teaching obligations, but many are also very interested in sharpening their teaching skills. Through Share Your Skills, they’ve offered and organized presentations for undergraduate students on, for example, how to apply for graduate school. The group has also offered education on more technical topics, such as specific computer coding languages and statistics, as well as professional development workshops for graduate students. Group members have also had the opportunity to work with local schools.

Boettcher hopes someday to take undergraduates to a remote island and inspire the next generation of marine scientists.