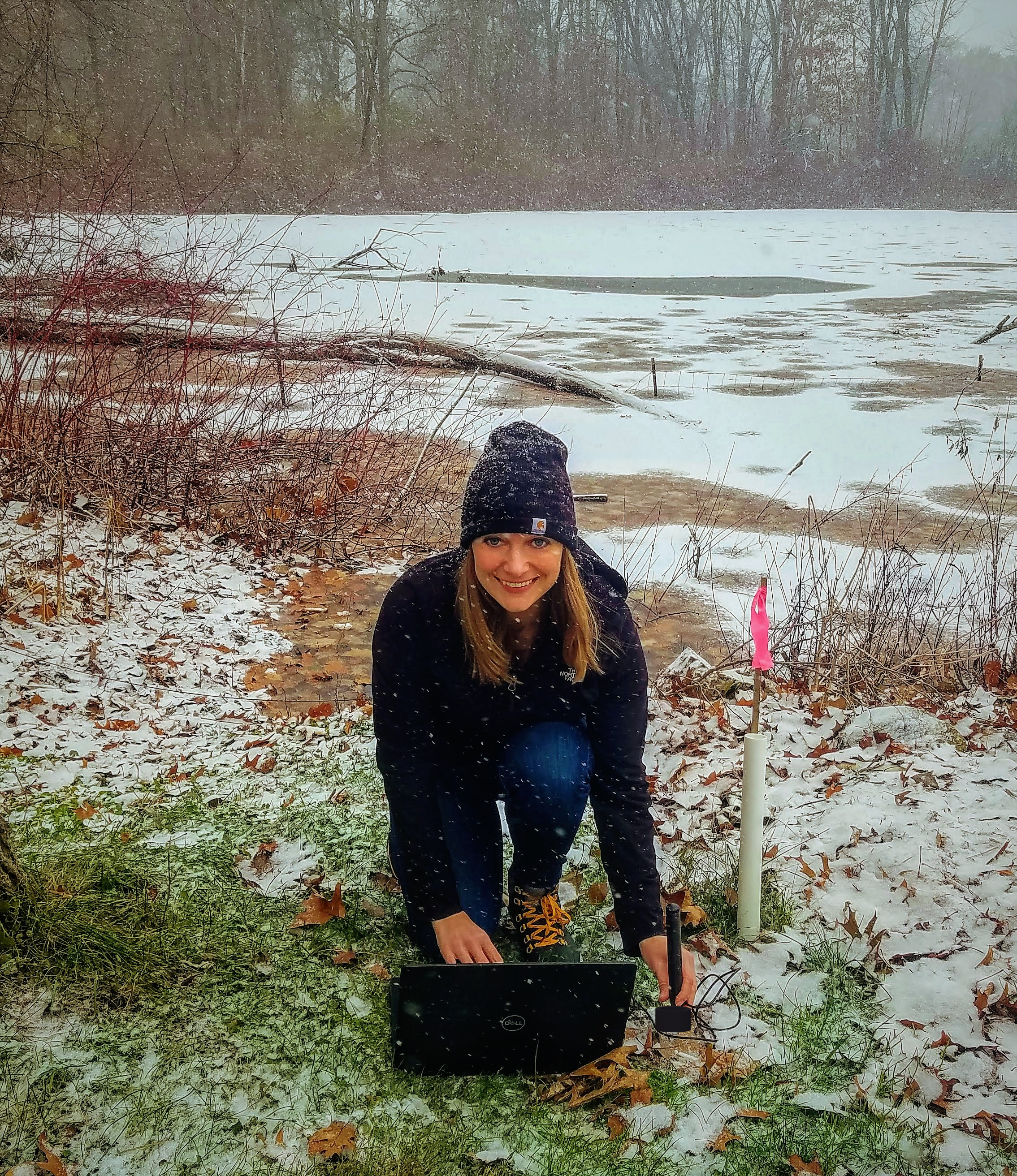 “I never knew I wanted to be a hydrogeologist until I became one,” says Mary Hingst, doctoral candidate in Water Science and Policy at UD.

Hingst was recently named a DENIN Environmental Fellow for 2021–2023 in support of her work on groundwater salinization in Delaware. Her interest in water resources has also taken her to East Africa seven times to help develop community water projects.

She didn’t know when she started college what she wanted to do. She was always good in math and science, and her parents encouraged engineering.

“I randomly went through the list of science and math majors and picked geology,” she says, “because it had math and science and you got to go outside on field trips.”

Hingst enjoyed her undergraduate work in environmental geosciences at Michigan State University, and her master’s work at the University of Texas at Austin. Both were geochemistry focused.

She got a job in the field afterwards, but it “wasn’t great,” Hingst says. Then an erroneous Google search led her to her current passion: hydrogeology. “I was looking for the company GSI Environmental, but when I just typed in ‘GSI,’ GSI Water Solutions came up, and they were hiring. So I submitted my resume on a whim and I thought I was going to do environmental work, but they hired me to be a hydrogeologist.”

With her growing skill in the field, she got involved with a nonprofit organization building water systems in East Africa. The nonprofit is based in Austin, where she did her master’s work. A fellow student was volunteering, and Hingst had always liked helping people and volunteering, so she asked how she could help.

She has worked primarily in Kenya, but also completed wells in Tanzania and South Sudan. She was part of the organization’s technical team of volunteers and helped to select, design, and oversee the implementation of numerous water system projects. She assessed hydrogeologic surveys of potential drilling sites and supervised drilling, construction, and testing of wells.

“I’m really proud of the work I got to do with the organization in East Africa,” Hingst says. “Being over there, you have the entire community watching because they’re waiting to finally have clean water. These projects were rather miniscule compared to the large municipal projects I was working on professionally, but being able to see the direct impact your work has on a community—that’s what really drove me to come back and make that my life’s focus.”

Her experiences in East Africa pushed her to come back to school. She wanted to learn more about international development and water policy, where she lacked formal experience.

Another Google search led her to her doctoral advisor, Holly Michael, director of DENIN, and Unidel Fraser Russell Career Development Chair for the Environment.

As part of the National Science Foundation–funded Project WiCCED, which focuses on water quality around Delaware, Hingst is studying salinization of groundwater and groundwater resource management.

In the Dover region, farmers, municipalities, and industries compete for water. Due to climate change, sea level rise, and increased extraction of groundwater, salty Delaware Bay water is infiltrating further inland, both on the surface—from flooding and through surface water bodies—but also by belowground movement into the aquifer.

Hingst has installed sensors in wells, surface water bodies, and irrigation ponds around the area and is collecting real-time field data to determine the mechanisms and driving forces behind salinization there. She’ll build off of that to develop a groundwater model for future scenario predictions.

She is sharing her findings with farmers where her monitoring equipment is and with Dover city officials. This collaboration has already led to implementation of effective mitigation efforts. The installation of a tidal gate on an irrigation pond reduced peak salinity by 95% during the following irrigation season.

Hingst likes that her research addresses a real-world present-day issue. “Forty percent of the global population lives within 100 kilometers of the coast,” she says. “So a huge portion of the population is at risk of having their groundwater supplies or their fresh drinking water supplies contaminated by increasing salinization.”

And if the groundwater source for irrigated agriculture becomes salinized, farmers can’t irrigate and grow crops, which will have huge economic and societal impacts as well.

“I like how comprehensive this project is turning out to be,” Hingst says. “It’s not just looking at one aspect of the issue.”

She’s excited to get into the social science aspects as well. She’s working with Leah Palm-Forster, associate professor of applied economics at UD, to design a behavioral economics experiment to look at how the location of water users and their perceived risk and impact on other water users affect water use behavior.

Her professional and volunteer work taught Hingst much about the disconnect between policies, how they’re implemented, and how people react to them. When she’s done with her doctoral work, she hopes to find a position to better connect all these factors and people involved. She’s exploring policy fellowships that would let her use her technical background to help policymakers better understand the science and design better policies. She’s also considering returning to consulting, but with companies that focus on international development work in water and sanitation so she can ensure that projects are implemented correctly.

Hingst’s passion for the environment spills into her leisure time as well. She serves as the representative for the Department of Earth Sciences to Graduate Student Government and is part of the sustainability committee to encourage earth-friendly policies at the university.