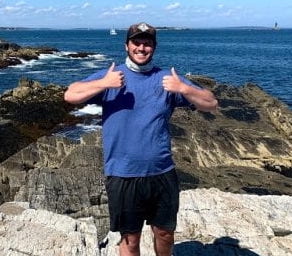 “I grew up in a town that’s kind of obsessed with rivers,” says Max Huffman. “Pittsburgh is geographically dictated by three major rivers. I grew up along the Ohio, and there you see this contrast between what humans have done and what nature has done.”

Huffman, who was recently named a DENIN Environmental Fellow for 2021–2023, explained in his proposal for the fellowship how his childhood among the relics of the U.S. steel industry motivated his academic interests: “Understanding the connection between human activity and the environment, as well as how we might restore natural systems, has motivated much of my research,” most recently in geomorphology.

Sediment—sand, silt, and clay—is eroded at higher elevation and transported through rivers and streams down to “depositional basins,” such as Chesapeake Bay or Delaware Bay, where sediment settles out. “We think of rivers as acting as conveyor belts, moving sediment from higher elevation to lower elevation,” Huffman says. “But in actuality it’s more stop and go.” Sediment is cycled between relatively brief periods of transport within the stream channel and much longer periods of storage in the floodplain and gravel bars adjacent to the channel. Once sediment enters these storage spaces, it can remain there for maybe a year to several thousands of years before it is eroded back into the channel and continues downstream.

The goal of Huffman’s research with James Pizzuto, professor of geological sciences at UD, is to develop a model that tracks sediment movement through a watershed to a depositional basin, including the storage phase.

“When we’re trying to model how sediment is moving through the watershed,” Huffman says, “we really need to focus on the storage component, because it’s taking up much more of the time.”

His work addresses the lag between when sediment enters the watershed and when it exits. This is important to know in assessing the timing and effectiveness of streambank restoration strategies.

“This model will give us a tool to understand how these strategies are going to play out over time” he explains, or with future changes in climate. His work could eventually be applied to larger systems such as the Chesapeake or Delaware Bay watersheds.

The first version of the model will focus on the White Clay Creek watershed in southeastern Pennsylvania and northern Delaware. Huffman is pulling together geologic data from many different sources to get a sense of what the watershed looked like through history.

“The first step in building this model is to create something that we can test with data we have,” he says. Because sediment is being stored for thousands of years, he must create a model that can operate on that timescale.

He’ll check the utility of his draft model using data that describe past disturbances in the landscape as far back as the arrival of European settlers. They brought about big shifts in ecosystems—deforestation, the construction of dams, urban growth. Huffman will use those disturbances as tests for his model. For instance, he’ll look at the effects of the many mill dams built in the Northeast to see how they changed sediment deposits. “We can go and observe the deposits of that age,” he explains. “Does our model produce something similar to what we see in the environment?”

“Once we’ve successfully created the model,” Huffman says, “and we’re happy with how it reproduces what we see [for sediment storage] in nature, we’ll develop a tool that will allow us to extend this model into the future.” He’ll test different future disturbances in the watershed to determine the volume of sediment stored and delivered downstream.

Many different restoration strategies exist to slow the addition of sediment to downstream watersheds, such as establishing vegetated buffer zones along streams or strengthening stream banks to resist erosion. We know there’s a lag between implementation of a restoration strategy and when the effects become visible. Huffman’s model will be an initial step in accounting for the lag.

Huffman grew up in a family that was “always on the river” in Pittsburgh, kayaking or swimming.

For undergrad he went to Hope College, a small liberal arts school in Holland, Michigan, where he earned a bachelor’s degree in geology. There, he benefited from involvement in “a whole suite of little research projects,” he says. For example, at Saugatuck Harbor Natural Area, a freshwater coastal dune system, he was part of a team trying to predict coastal dune migration as a result of human foot traffic. “That was the start of my sediment transport journey,” Huffman says.

The undergraduate research projects sparked his interest in research and earning a doctorate.

After finishing his degree, he’d like to continue doing research either within the university system or through a government agency such as the U.S. Geological Survey or the Forest Service, to help design effective watershed restoration strategies.

Huffman cites his father, an eye doctor and former competitive whitewater kayaker, as a critical role model. “He isn’t afraid to look kind of goofy to go observe something cool.” Recently his dad started snorkeling in little creeks around their house in Pittsburgh and making short videos of fish and cool underwater landscapes. “Recently,” Huffman says, “I saw one where he’s swimming out through rapids just to see what’s under this big boulder that’s creating an eddy. I would say he’s an interesting person who is always trying to find some new way of seeing a familiar landscape.”

He also enjoys land-based adventures—hiking with Nala, the 10-year-old beagle mix he adopted during the pandemic.