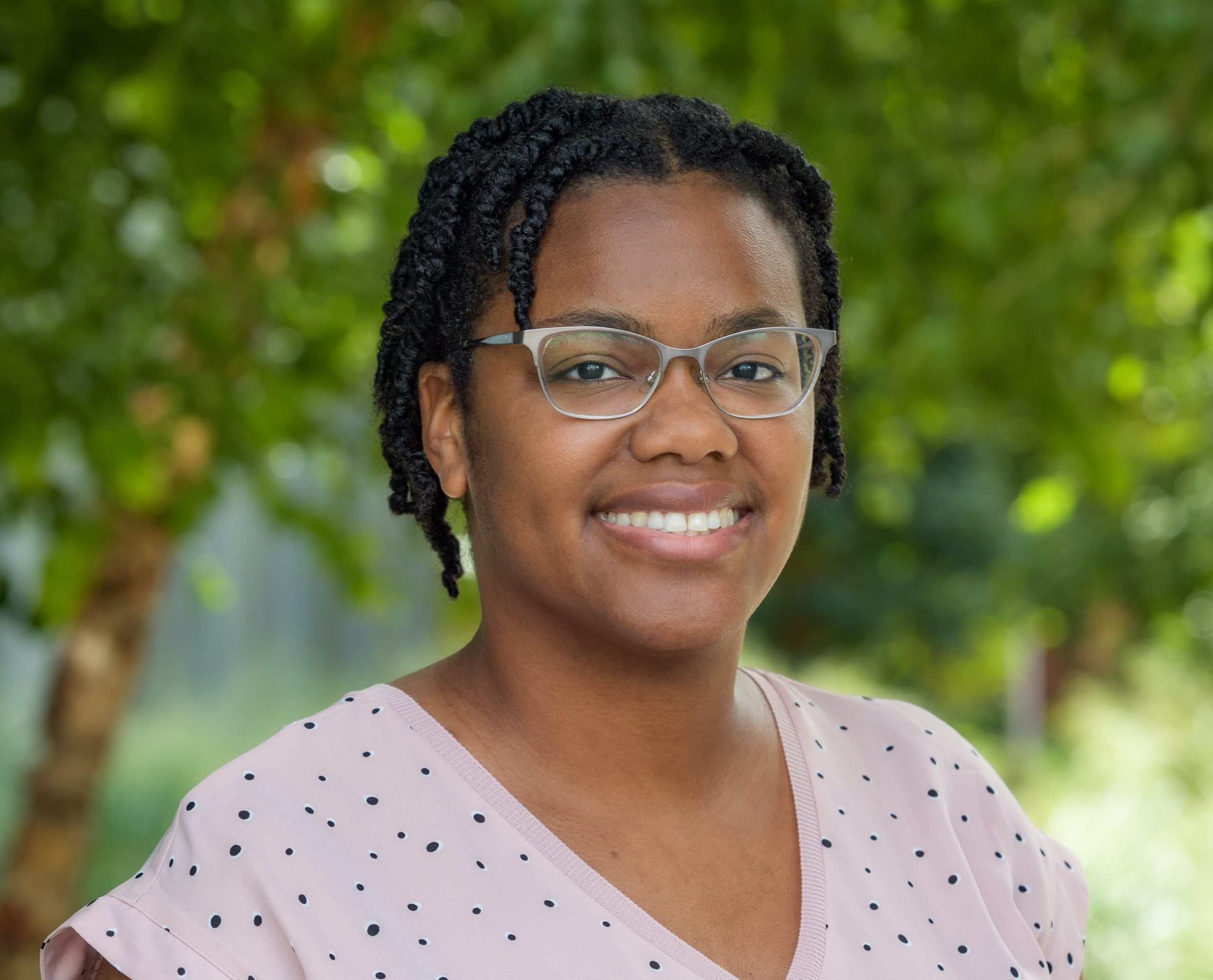 It sounds too good to be true. How could a virus in plant roots do all that?

Soybeans are essential in meeting future food needs for both people and livestock. As world population increases, the protein from soybean-containing tofu and soymilk and many other foods will assume greater importance. Farmers are under constant pressure to increase their crop yields, which can lead to overfertilization that damages water quality.

But soybeans have their own nitrogen-producing “factories” within their roots: soybean bradyrhizobia (SB). These are naturally occurring soil bacteria that convert atmospheric nitrogen into plant-available nitrogen within nodules on the plant’s roots. SB are a natural and cost-effective alternative to fertilizer.

Enhancing the “cooperation” or symbiosis between SB and soybean is the ultimate goal of Vanessa Richards’s doctoral research with Jeffry Fuhrmann, professor of soil and environmental microbiology. Richards was recently named a DENIN Environmental Fellow for this work.

Improving the symbiosis between SB and soybean would allow soybeans to be grown more efficiently with less fossil fuel–derived fertilizer. The use of fertilizer releases greenhouse gas emissions that contribute to climate change. Reducing the need for chemical fertilizer would also help reduce water pollution from soybean fields.

SB strains differ greatly in their symbiotic effectiveness. This means that some strains are more efficient at helping produce higher yields and protein content in soybeans. Richards hopes to identify SB that are high in symbiotic efficiency.

She has found that many SB strains spontaneously produce viruses. She is studying how this production affects the symbiosis between SB and soybean and the effectiveness of SB in supplying nitrogen to the plant. This work could ultimately lead to greater soybean yields with lower production costs and reduced environmental impact.

In summer 2021 Richards grew one cultivar of soybean with 25 different strains of SB, including the 21 strains for which she sequenced the genome, in a greenhouse to see how the strains affect the plants. At harvest she measured root and shoot length, counted root nodules (where SB live), measured chlorophyll content, and collected a host of other data. With all of this information, Richards hopes to relate gene presence to how well soybeans grow in the greenhouse. This will help her further identify which genes affect the symbiotic relationship.

Richards intends to work with UD Agricultural Extension staff to let soybean growers know how her research might be helpful to them.

Her interest in the life sciences stretches way back. “As a child,” Richards says in her application for the DENIN fellowship, “I would watch surgery programs on the Discovery Health Channel. I volunteered at a veterinary hospital and assisted in surgeries. … Scientific techniques and language intrigued me.”

After finishing high school in southwest Connecticut, she earned a bachelor’s degree in pre-veterinary science from Delaware State University. She decided against vet school after working in a veterinary office. But she did enjoy undergraduate research with bacteria.

Richards stayed at DSU for a master’s degree in food science and biotechnology, during which she studied a protein in a bacterium that causes spoilage in fish.

She was a recipient of a Bridge to the Doctorate Fellowship at DSU. This prestigious National Science Foundation–funded program “promotes the participation of underrepresented minority students in science, technology, engineering, or mathematics (STEM) disciplines” by providing financial, academic, and professional support to candidates. During this time Richards participated in research to isolate from Delaware ponds new viruses that use bacteria as their host. This project led to her current research interests.

Richards thinks she’ll end up working in industry or government once she has finished her doctoral work. She has also considered science policy work. During the pandemic she enjoyed sharing her knowledge of viruses.

Richards has struggled with her twin identities of scientist and Christian. “It can be hard in some spaces to say that you have a religion, especially being Christian in the science field.” She recently found inspiration in Francis S. Collins’s book The Language of God: A Scientist Presents Evidence for Belief. Collins was leader of the Human Genome Project, which first sequenced the human genome, and is now director of the National Institutes of Health. Collins “unapologetically relates evolution and belief in God,” Richards says.

She is active with Blue Hens for Christ, a campus ministry group, and the Veritas Forum, which encourages friendly conversations between people of different faith beliefs.

During summer 2020, amidst the pandemic and social unrest, Richards was unable to do her planned greenhouse experiment because it required undergraduate help. A professor in the UD Plant and Soil Sciences Department started the Justice, Equity, Diversity and Inclusion Committee to advocate for inclusion within the department and university. Involvement with this group gave Richards purpose. The group arranged for virtual speakers about diversity topics, issued participants challenges to read or watch certain books or movies, and facilitated discussions. “It was helpful to know in a time when people felt let down that I was able to do something,” she says.