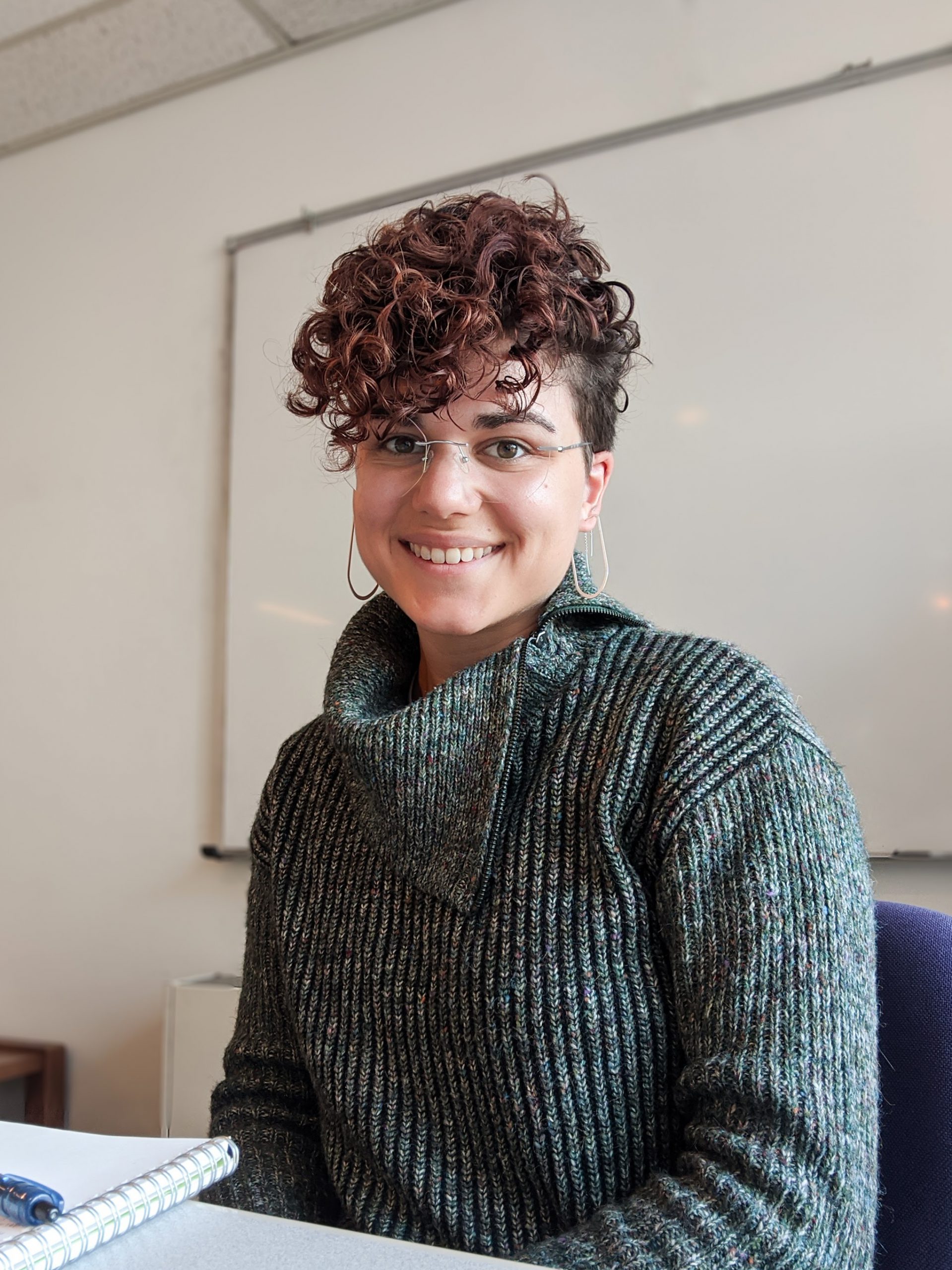 Joanne Norris, a 2020 DENIN Environmental Fellow, brought an unusually broad array of experience to her Ph.D. program in materials science and she has found a way to weave many of the strands together in her research.

Norris came to UD wanting to work on biodegradable chemicals with environmental applications. She found just the place in the labs of John Rabolt, Karl W. and Renate Böer Professor, and LaShanda Korley, Distinguished Professor, both in the Department of Materials Science and Engineering.

For her Ph.D. work Norris hopes to use a biodegradable chemical made by bacteria as a passive sensor for high concentrations of nitrate in water.

Farms on the Delmarva Peninsula produce over 550 million broilers—chickens raised for meat—each year. This density of birds means that nitrate from their waste can be high in water.

Norris’s chemical of interest is a polymer called PHBHx. It has piezoelectric potential, which means that it can generate a voltage if it’s manipulated mechanically. She is working on adding a coating to this chemical to optimize its passive nitrate-sensing ability. The goal is that when it comes in contact with nitrate at a concentration just below the legal limit, the sensor chemical will change shape and generate current. This would signal monitors that nitrate levels are high.

When she finishes her Ph.D., Norris may further develop a startup company she has already established that processes waste exhaust from heating and air conditioning systems in small commercial properties to capture and convert carbon dioxide into high-purity calcium carbonate, which has many uses. She and her partners are doing startup workshops to flesh out the idea more. Instead she may start another company.

Norris first became interested in the environment in high school when she had “a particularly sparky environmental science teacher” who showed the class documentaries such as Food, Inc., which examines corporate takeover of our food sources. Norris remembers being angry that she didn’t know before then how big some environmental problems were.

“I definitely remember feeling like I had a purpose after that,” she says.

Norris strengthened her diverse interests in her undergraduate years, when she earned dual degrees in sustainability studies and economics at Hofstra University with minors in geology and fine arts. She started a student garden and a sustainability club, through which they did educational events at a local preschool.

Farming and food production have been long-time interests. She has spent time in Greece, New York, and Florida doing volunteer farm work on small organic farms.

“Over time,” says Norris, “I was building this arsenal of information about farming, the effects of farming, and the effects of many human practices on the environment.”

She earned an M.A. in climate and society from Columbia University. Coursework in climate policy made her realize she would prefer to apply technology to solve real-world problems. At Columbia, she started taking electives in environmental engineering and learned about some ways technology can help solve environmental problems.

During her master’s work Norris interned with a hydroponics company, where she learned about fertilizers and vertical and indoor gardening. After her master’s she did research and development for a company using nanobubbles of oxygen to diffuse algal blooms. All these diverse experiences fed into her future plans.

But there’s yet another major interest in Norris’s life—painting. Back before her interest grew in the environment, she intended to be an artist. She still paints and has found ways to merge art and science. In 2019 she had a gallery show of portraits of notable women in science, technology, engineering, and math (STEM). This brought her advisors and grad school friends into the art world, which was unfamiliar for many of them.

Norris has found networking skills gained at science conferences to be helpful in setting her at ease to show up at art events in Wilmington, where she lives. She teaches a weekly painting class to teens through The Warehouse, a new youth center in Wilmington. She’s helped them explore different styles of painting. Some of the teens had never painted before. She also hopes to bring science programming to The Warehouse, and continue to use her many skills and experiences to help tackle some of the world’s environmental problems.