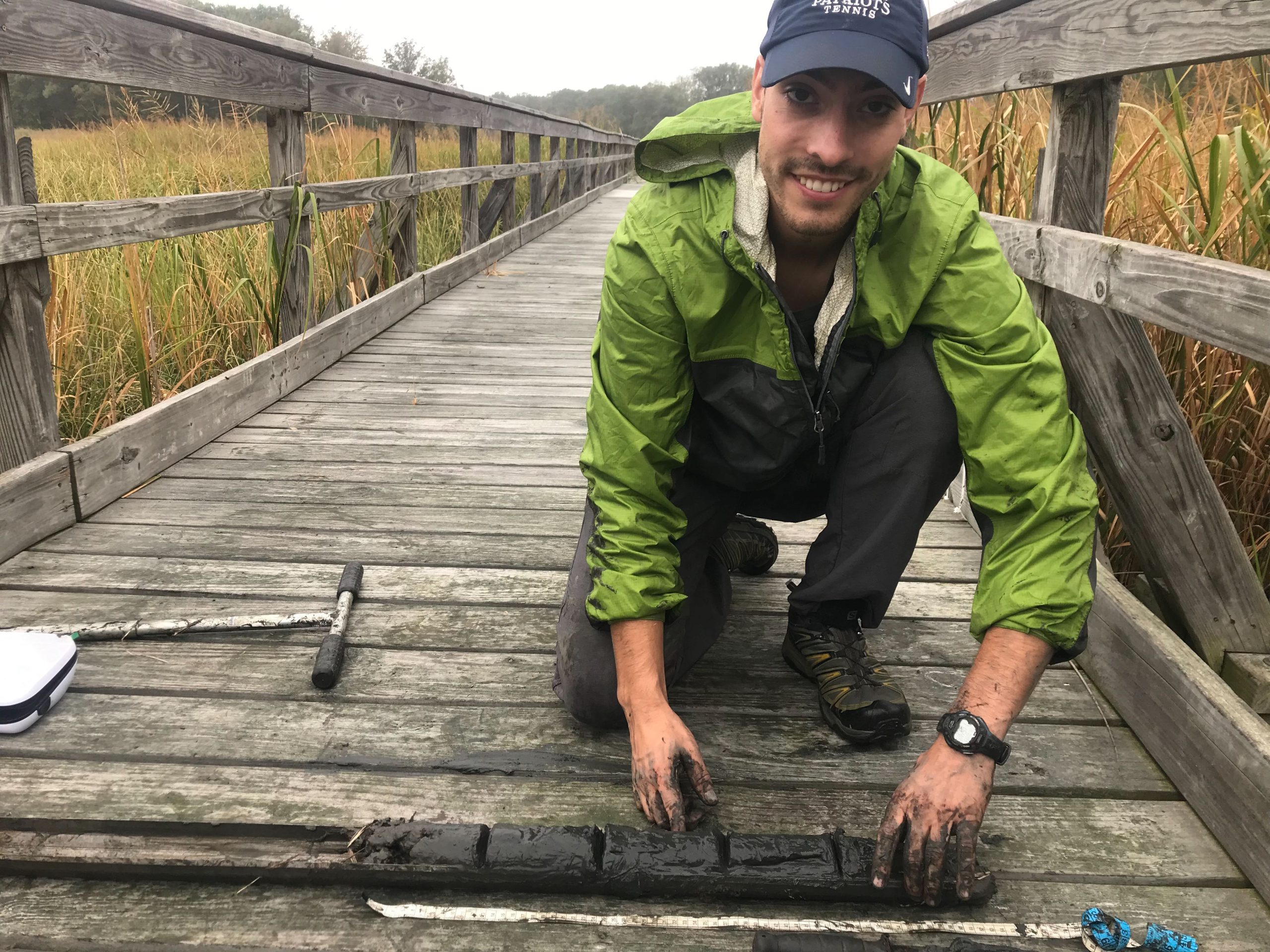 Sean Fettrow loves the interdisciplinary nature of his research on the biogeochemistry of soil carbon in coastal wetlands. “Biogeochemistry encompasses three different fields of study,” he says, “so this seemed a perfect career track for me.”

Salt marshes act as efficient carbon sinks, holding carbon in the soil and plants. Fettrow hopes to determine how stable the carbon is in marsh sediments and how it may be affected by climatic shifts. “My research is investigating and identifying critical soil processes related to the carbon cycle,” he says, “and how those processes will change with sea level rise.”

The world is losing tidal wetlands rapidly to urbanization and agriculture. Fettrow hopes his research might help provide data to convince policymakers that these areas are more valuable intact.

He explains that we know different marshes have very different abilities to sequester, or hold onto, carbon in their soils. The rate can vary by almost 100 times, but on average, marshes store carbon much more quickly than even tropical rainforests. With his advisor, Angelia Seyfferth, associate professor of biogeochemistry and plant-soil interactions in the Department of Plant and Soil Sciences, he is assessing marsh biogeochemistry seasonally, spatially, and within tidal cycles. He hopes to use this information to improve our understanding of factors that control carbon stability in marsh soils and help explain some of the variability in marshes’ carbon-holding capacity. This information will help scientists make more accurate models to predict how these ecosystems will respond to changing conditions.

Fettrow’s work is part of the Coastal Critical Zone Network, funded by the National Science Foundation. This multidisciplinary collaboration among researchers at different universities seeks to “understand and predict current and future changes” in hydrology, ecology, geomorphology, and biogeochemistry of the Delmarva Peninsula.

Fettrow grew up in rural central Pennsylvania surrounded by farms and forests and spent most of his free time playing outside. He recalls collecting and identifying plants and bugs as a kid. “At the time, people thought was strange,” he says, “but it was always a part of who I was.”

When it was time to choose a major at Penn State Altoona, he didn’t hesitate: environmental studies. In sophomore year he took Soils 101 and was intrigued to learn that soils can help regulate climate.

At Altoona, Fettrow met and interacted frequently with Ian Marshall, an English and environmental studies professor, over environmental topics and guitar playing. “He helped me realize the importance of scientists in pushing better policy forward,” Fettrow says. “We have only one planet.”

As an undergraduate intern with the Pennsylvania Department of Environmental Protection, he helped collect surface water samples to assess the health of the Susquehanna River. He examined aquatic insect samples as part of work on indicators of biotic integrity. He maintained water quality data devices and electrofished for a fish physiology study. This internship cemented for him that he was on the right path of study.

Fettrow gained experience in communicating with nonscientists about science topics as president of the Eco-Action Club at Penn State Altoona. The group planned a successful community-wide Earth Day annually and organized stream cleanups and tree plantings.

After finishing his bachelor’s degree in 2016, Fettrow’s next step was a master’s degree in applied geoscience from the University of Pennsylvania. He studied terrestrial carbon cycling while also interning at Geosyntec Consultants, where he delineated groundwater contamination and installed pollution remediation systems. He found out that not much was known about coastal carbon cycling, hence his interest in Seyfferth’s lab at UD.

Fettrow hopes to work as a professor or a government scientist after completing his doctorate. Either way, he wants to continue doing research.

Besides working outdoors, Fettrow also finds his recreation outdoors. He takes frequent multiday backpacking trips through places such as Delaware Water Gap National Recreation Area and the Adirondacks. He has clearly found his calling in the environment.